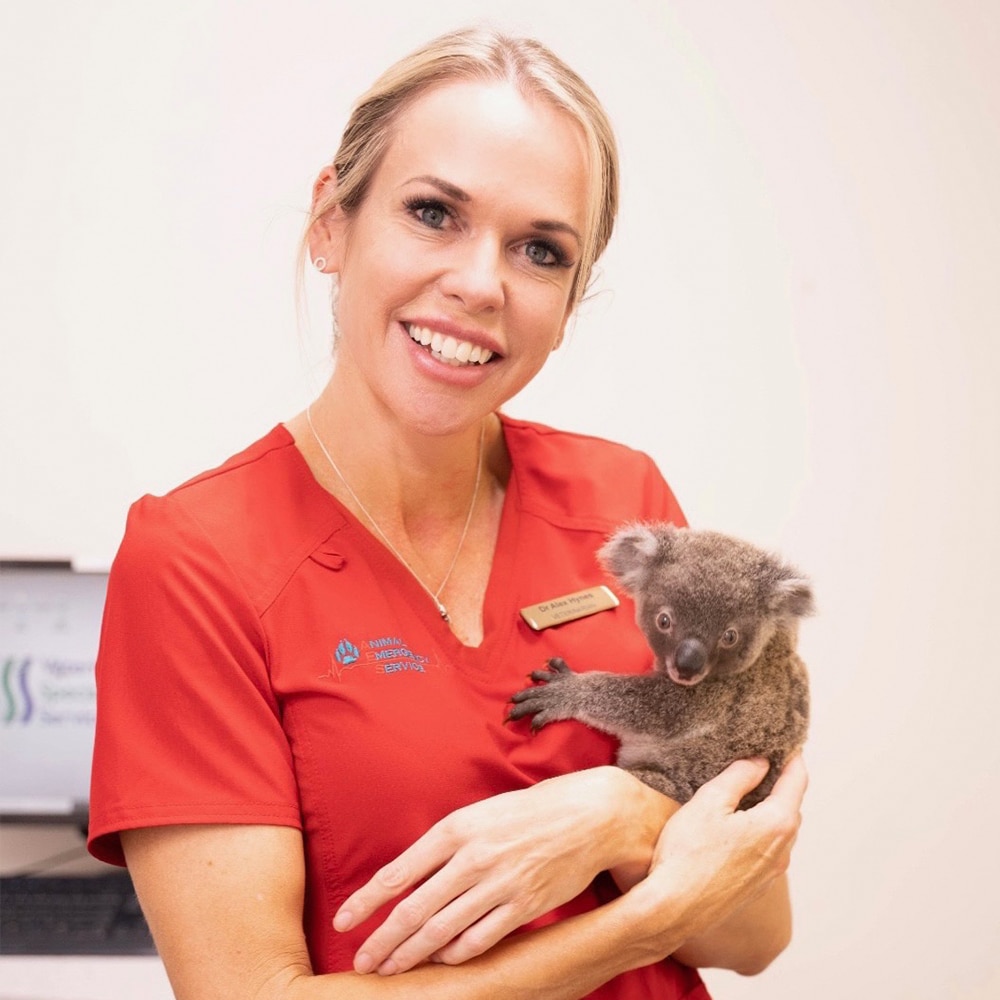 Dr Alex Hynes is a director and senior clinician at Animal Emergency Service. Her passion for helping animals and talent in the field of emergency pet care has led to becoming one of the most well-known veterinarians in the country since taking on the role as one of the new Bondi Vets on the tv series airing on Channel 9.
After graduating from the University of Queensland Alex worked in rural practice looking after both large and small animals, before relocating to the UK for five years. While there she gained a Certificate in Small Animal Surgery through the European School of Veterinary Studies.
Alex‚Äôs interest in emergency and critical care was sparked after she accepted a position at an after-hours practice in the UK. Upon returning to Australia in 2007 she was inspired by the vision of the founding partners of AES and started working as a junior veterinarian at the company.¬† Between 2012 and 2018 Alex became the Veterinary Manager of the Underwood hospital and played an integral part in developing the extraordinary team culture for which AES is renowned. She also held the position of Hospital Director from 2015 to 2019.
In her current role as Chief Client Officer on the Animal Emergency Australia executive team, Alex is dedicated to strengthening the relationship between veterinary colleagues, clients and the business ensuring they receive the best experience possible.

Dr Alex Hynes was awarded Master of Veterinary Studies through Murdoch University in 2011 and obtained Membership to the Australian and New Zealand College of Veterinary Scientists in the Chapter of Emergency and Critical Care in 2014. Previously, Alex has been an examiner for the Australian and New Zealand College of Veterinary Scientists and continues to be a mentor for candidates.
Alex is committed to playing a steadfast role in advancing the Animal Emergency Service vision of providing the highest standard of medical treatment for all pets at all hours.¬† She has become a trainer and mentor to new veterinarians, a public educator, and a leader in the field of urgent care for animals.

“I am proud to be part of this team. When I walk through the doors at the start of a shift, I’m thinking not only about doing the best for my patients that day but importantly – being there for the families of pets when they need help the most. I’ve loved my journey over the years at Animal Emergency Service, but what I’m doing now with Bondi Vet ¬†is a very special role. I have the opportunity to reach out and share some incredible stories, show the world the special place that pets have in our lives and the kind of people it takes to work all hours of the day or night to reunite sick pets with their owners.”

Away from work Alex has a love of fitness and is also captivated by life under the sea, spending her spare time scuba diving on the Great Barrier Reef. Alex is equally passionate about her charity work with Rebuild Hope Nepal, a growing organisation that restores educational opportunities for children.
Her Samoyed Yoshi goes with her everywhere ‚he’s as comfortable spending long days at the hospital as he is with flying across the country accompanying her on speaking engagements and at events in her role as one of the Bondi Vets.